This article is transferred from: China News Network 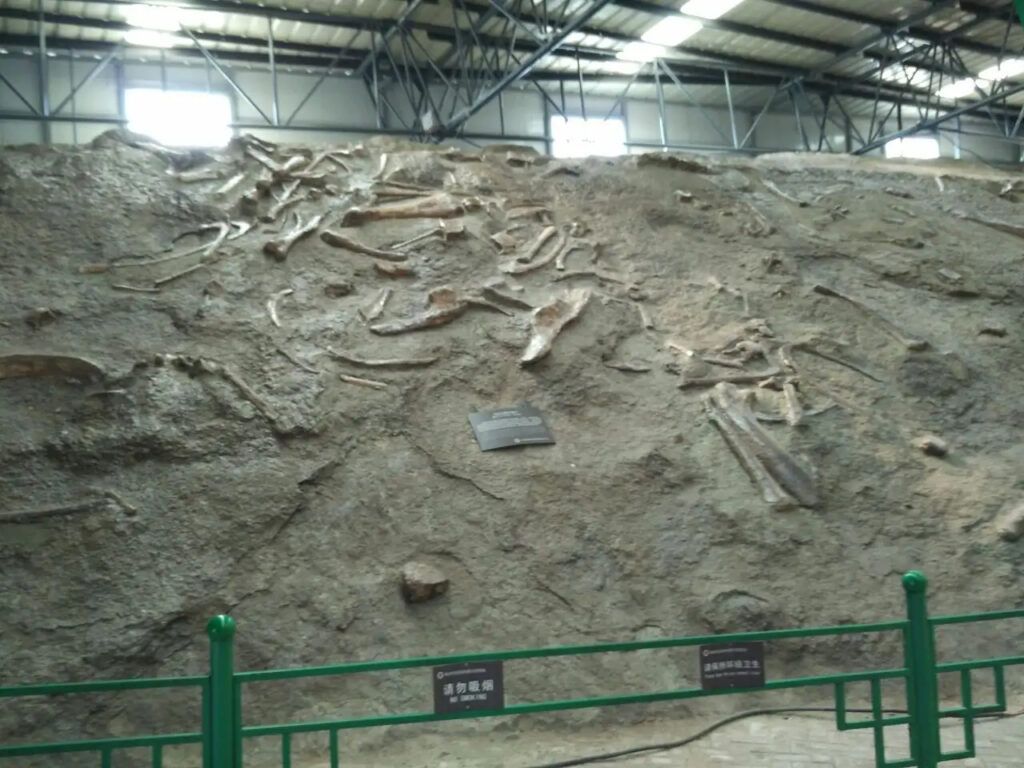 Recently, the staff of Zhucheng Dinosaur Culture Research Center discovered a relatively complete water ripple trace fossil and some large dinosaur footprint fossils from the main fossil relic area in Zhucheng during the spring field fossil exploration process, which made Zhucheng usher in “high light” again. time”. Since the 1960s, more than 30 dinosaur fossil burial sites have been discovered in Zhucheng, covering an area of ​​nearly 1,000 square kilometers, winning the reputation of “China’s Dragon City”.

Zhucheng has the largest and most concentrated group of dinosaur fossils in the world, with an exposed area of ​​nearly 20,000 square meters, which is 10 times that of Utah National Dinosaur Park and 6 times that of Lufeng World Dinosaur Valley. It has the largest dinosaur footprint group in the world, about 5,000 square meters and more than 11,000, which is rare in the world. At the same time, Zhucheng dinosaur fossils belong to the late Cretaceous period, about 75 million years ago, and are the most typical witnesses of Cretaceous geological events.

Regarding the “ dragon”, there is an ancient folklore circulating in Zhucheng.

There is a river in Kugou Village, Lubiao Town, Zhucheng City, which is called Juan River. According to legend, in ancient times, there lived a kind white dragon in the Juanhe River, who protected the local area with good weather and good harvest every year. One day, a black dragon came from out of nowhere, and the black dragon was irritable and made waves. The white dragon was determined to kill the people, and it entrusted the people with a dream, saying that it was going to fight the black dragon, and hoped that the people would prepare steamed buns and lime. Seeing the black waves turning up in the river, it was a black dragon coming up to forage, so he quickly threw lime into the river. The next day, the people acted according to the plan. After the black dragon swallowed the lime, it burned all his internal organs and the pain was unbearable. He raised his head and bowed his body, and he just sprang out of a north-south ditch. Finally, he died of exhaustion and was buried in it. The locals called this place “ Dragon Bone Stream” “Black Dragon Valley”. 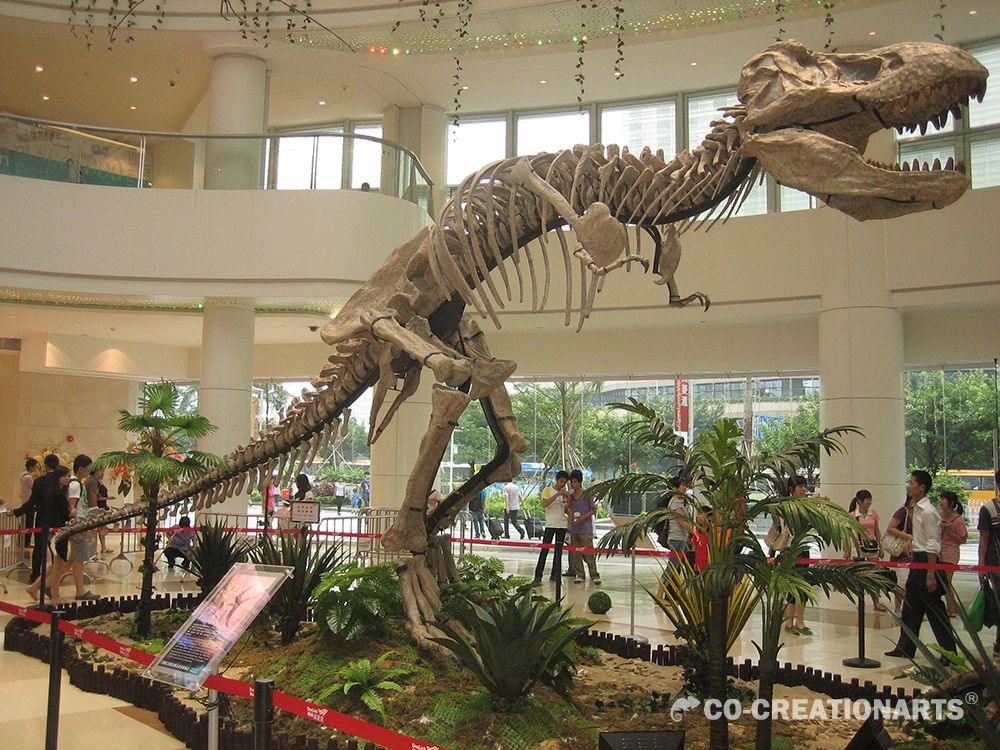 Interestingly, in the keel creek and the surrounding farmland, some giant bones are exposed from time to time. The local farmers discovered that these bones have a wonderful function, which can stop bleeding and reduce inflammation, so they used them as medicine and called them keels. People think that the Keel Stream is a treasure of Feng Shui, and gradually, after the death of the villagers, they will choose to be buried on the slope closest to the Keel Stream.

Are there dragons in the Keel Stream? Do those huge bones belong to the white dragon that died in the stream according to the villagers’ legend? For many years, no one knew the true origin of the keel until the arrival of paleontologists in 1964. Finally revealed a shocking secret. 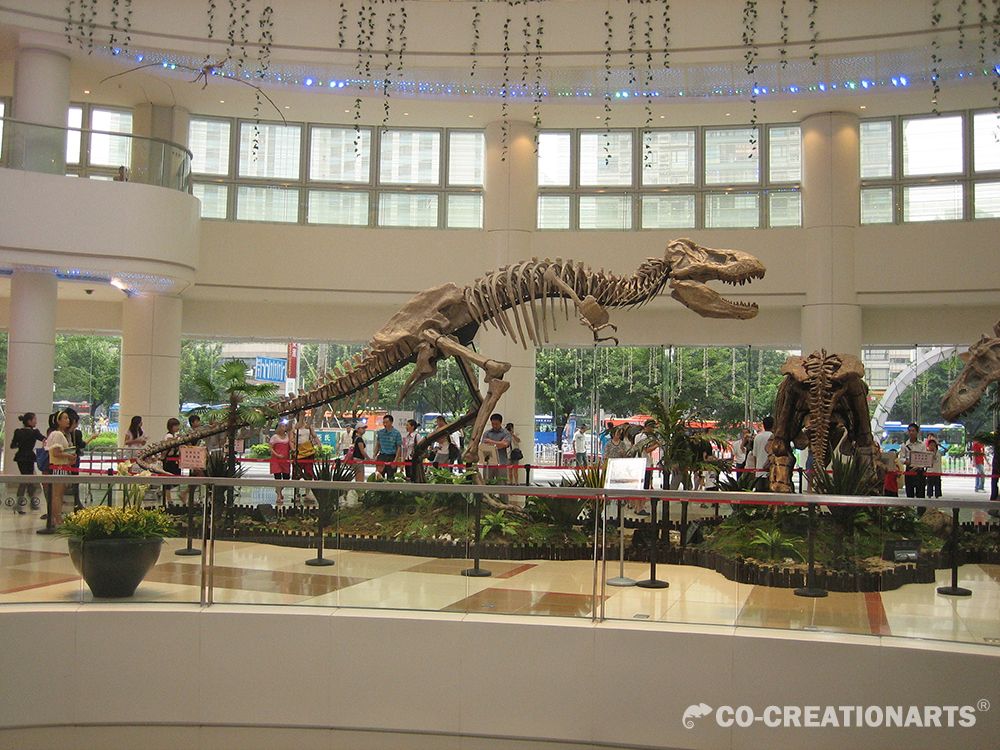 1964 is the year of the dragon in the traditional Chinese zodiac, and it is destined to be related to the “ dragon”. In October of this year, when the comprehensive research team of the Petroleum Bureau of the Ministry of Geology conducted a geological survey in Zhucheng, the strange and huge animal skeleton fossils in the Keel Stream attracted their attention. Afterwards, they transported some of the fossils back to Beijing and asked paleontologists for identification. The identification results are determined to be the skeleton of a dinosaur, and it is the fossil of a giant hadrosaur, a dinosaur that lived in the early late Cretaceous about 70 million years ago, which has never been found by humans before.

Hadrosaurus is a relatively advanced class of ornithopod dinosaurs. It is widely distributed in the Late Cretaceous strata in Asia and North America. In my country, it is mainly distributed in Heilongjiang, Shandong, Inner Mongolia, Xinjiang, Ningxia, Sichuan and other provinces. . In 1914, the Russians discovered the earliest hadrosaurus in my country: Heilongjiang Manzhousaurus in the Late Cretaceous strata of Longgushan, Jiayin County, Heilongjiang.

The shocking discovery of Zhucheng immediately caused a sensation in the paleontology community. In May 1966, the Ministry of Geology dispatched a scientific expedition team led by the famous paleontologist Hu Chengzhi to carry out the first dinosaur fossil excavation in Zhucheng Keel Stream. By June 1968, a total of 30 tons of hadrosaurus fossils had been collected, erected to a length of 15 meters and a height of 8 meters. It was the largest dinosaur among the hadrosaurs discovered in the world at that time. In 1972, Xinhua News Agency and People’s Daily successively released news titled “Huge Dinosaur Fossils Discovered in Shandong”. At that time, the early late Cretaceous hadrosaurus fossils had not been reported in the world, and the discovery of the dinosaur fossil skeleton, fill this gap. Later, Hu Chengzhi named it “Giant Shandong Dragon”.

Breaking the Guinness Book of Records 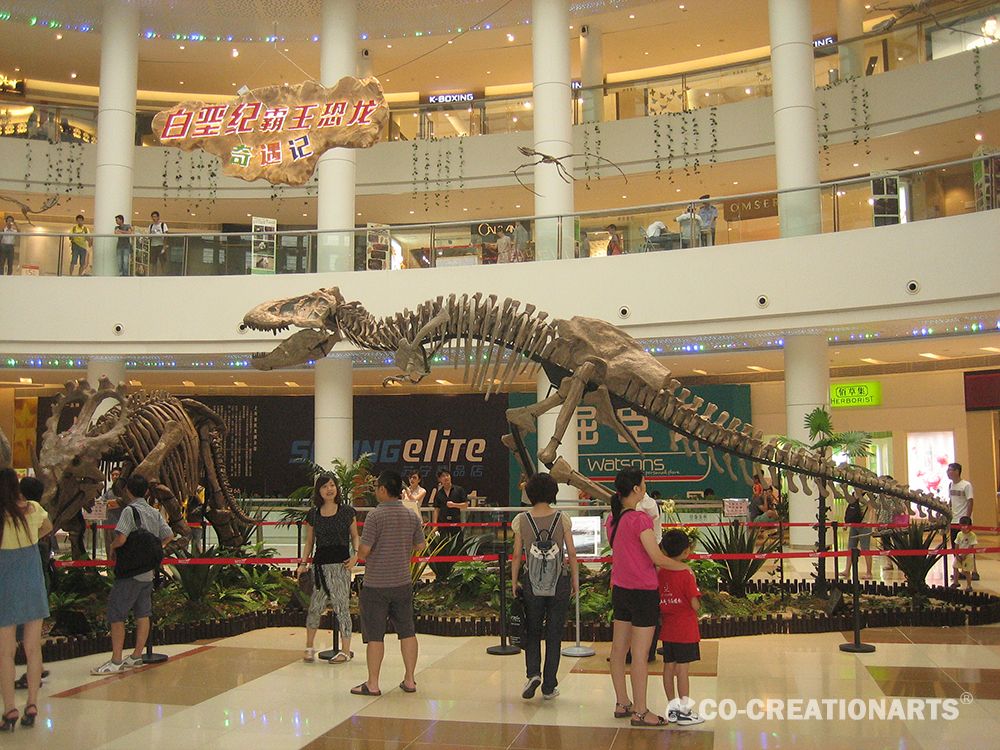 From June 1988 to December 1991, according to the needs of scientific research, the Institute of Vertebrate Paleontology and Paleoanthropology of the Chinese Academy of Sciences and Zhucheng jointly carried out the second large-scale dinosaur fossil excavation. Led by Zhao Xijin, a famous dinosaur expert, a group of hadrosaurus fossil specimens were collected from two fossil sites, Keeljian and Houjiatun West Hillside.

After the fossils were recovered, after more than 4 years of cleaning, repairing and restoration work, together with the first excavation of unframed fossils, a total of 3 dinosaur fossil skeletons were erected. Among them, the “giant Zhucheng dragon” with a length of 16.6 meters and a height of 9.1 meters has once again become the largest hadrosaurus discovered in the world, and won the Guinness Book of World Records. It is even bigger than the famous Tyrannosaurus ( T-Rex) a circle.

On May 23, 1992, the “Giant Zhucheng Dragon” was exhibited for the first time in the Zhucheng Government Auditorium, which caused a widespread sensation. On May 30, People’s Daily made a special report on “Zhucheng Exhibits the World’s Largest Dinosaur Fossil”, and CCTV also broadcast the news on “News Network”. Since then, people from all walks of life have come to Zhucheng to see the “ Dragon Face”.

Later, according to the needs of scientific research and fossil protection, Zhucheng City and the Institute of Vertebrate Paleontology and Paleoanthropology of the Chinese Academy of Sciences signed a cooperation agreement, and hired Xu Xing, a famous dinosaur expert, to form a special team and team. The 7 fossil sites including Jian, Zangjiazhuang and Huanglonggou organized the third large-scale scientific census and excavation of dinosaur fossils, and discovered the Zangjiazhuang fossil stacking area, the keeljian fossil corridor, the fossil uplift belt and the Huanglonggou dinosaurs. The footprint group is called “the world’s first group” and “the world’s first seal” by experts.

The Keel Stream Fossil Corridor is 500 meters long, 30 meters deep, and distributed on a 45-degree slope. Nearly 10,000 fossils are exposed. The fossils are densely distributed and scattered in a mess, like a huge relief; More than 20 meters, more than 1,000 fossils are exposed, and the fossils are scattered irregularly at the bottom of the ditch. Spectacular. Within the 5,000-square-meter area of ​​the Huanglonggou Dinosaur Footprint Group, there are more than 11,000 dinosaur footprints. Theropod and sauropod footprints of different shapes, sizes, and depths are arranged in multiple layers on the rock formation, as if it were a dinosaur. Big dance floor. Among them, the small theropod footprint is only 7 cm, and the large sauropod footprint is more than 1 meter in diameter. The discovery of such a large and concentrated group of dinosaur fossils and footprints at the same time in one area is a unique geological wonder in the world. 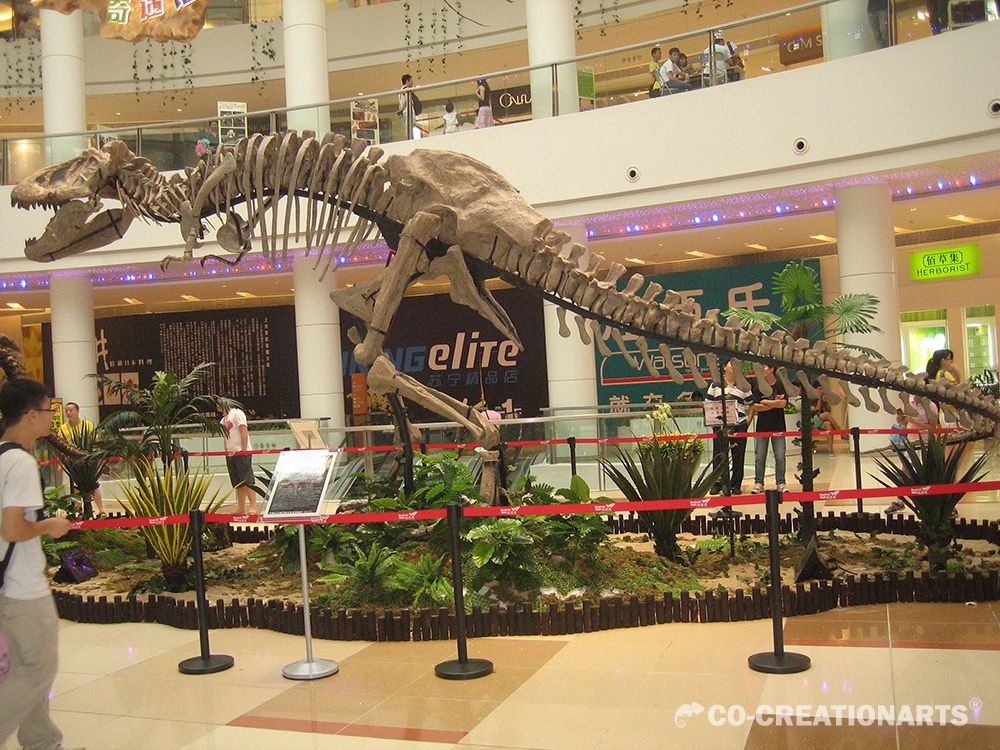 Zhucheng Hadrosaurus was huge and bulky, which determined that it was not good at long-distance migration, let alone running like ornithopod dinosaurs. Therefore, its living radius was limited and it could only live in a small area. Among the dinosaurs found in Zhucheng Keeljian and Zangjiazhuang, almost 90% of the skeletons are hadrosaurs. The large and small bones not only represent different stages of its ontogeny, but also show that Zhucheng Hadrosaurus was a gregarious dinosaur.

In the age of dinosaurs, Zhucheng had a warm climate, abundant rainfall, interwoven rivers, extensive lakes, lush vegetation and full of vitality. Around lakes, rivers and piedmont lowlands, a variety of ferns, gymnosperms and angiosperms grow, and groups of smaller sauropod and ceratopsian dinosaurs live; the low mountains in the distance and The hills grow tall pine and cypress, ginkgo, cycad, palm and other plants, live in groups of three or five giant hadrosaurs and large sauropod dinosaurs, and ferocious Tyrannosaurus rex and small theropod dinosaurs are wandering around. , looking for their prey targets at any time.

Abundant and high-quality cycads, palms, pine cypresses, ginkgo and other plants, although low in calories, are better in quantity, enough to satisfy the stomachs of hadrosaurs. After all, adult hadrosaurs eat at least 1 ton of food a day. The slender neck allows them to eat up and down while standing still, while hundreds of enamel teeth are firmly connected by bone tissue to form a huge washboard-like “mill” that can help the hadrosaurs deal with it. Fiber-rich tough plant.

Zhucheng hadrosaurs had a fast metabolic rate and grew fast, so it’s no surprise that they were huge. On the one hand, rapid growth can make them grow into giants, and on the other hand, the cubs of hadrosaurs can quickly have a huge body to deter the enemy. You must know that hadrosaurs are docile herbivores, with no sharp horns, no solid armor, and no flying speed.

The study found that there are special reasons why Zhucheng preserves so many dinosaur bone fossils. The experts imagined such a scenario: a certain summer, Zhucheng thundered with lightning and poured rain for several days. Suddenly, there were bursts of roaring sounds from the distant mountains, and a terrifying flash flood broke out. The flood roared in the valleys, sweeping down the sand, soil, branches, vegetation, etc., overwhelming the sky and overwhelming the earth.

Seeing this chaos, birds, pterosaurs, insects and other flying animals are flying blindly under the dark clouds; all kinds of dinosaurs are running wildly in the mountains, trying to find a way to escape. However, the galloping flood was like a runaway wild horse, mercilessly devouring everything between heaven and earth, and the dinosaurs could not escape this catastrophe.

After the mass death of the dinosaurs, the sun exposure caused the corpses to rot rapidly, and the entire Zhucheng Basin was soon covered with bones. The subsequent torrential rain washed the bones of the dinosaurs into pieces, making it difficult for us to see the entire dinosaur fossils today; at the same time, the mudslides caused by the rainstorm covered everything and made the keels buried deep underground. After tens of millions of years, the crustal changes have never stopped, and the dinosaurs who have been tempered by the earth meet us again in the form of fossils today.